Hike of the Month: Blanca Lake 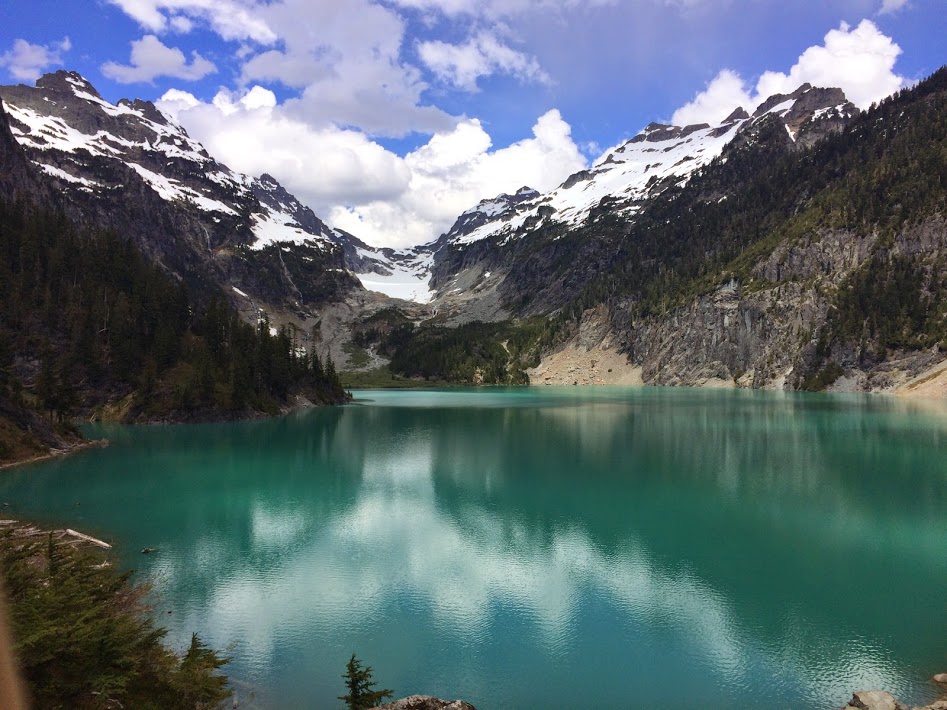 Blanca Lake is absolutely stunning. And the view is made all the more rewarding by the effort required to get here. The total round-trip distance to Blanca Lake and back is 7.5 miles. Climbing almost 3000 feet in just under three miles, the hike ?is certainly a challenge, but one for which the payoff is well worth it. If you can go in the spring or early summer, when there is still some snow on the surrounding peaks, I would definitely suggest doing so. I went in late may during a year with very little snowpack, and the snow made the lake all the more beautiful.

The trail to the lake is enjoyable and very well maintained. The majority of the hike passes through second-growth forest, full of mature trees, which provide a lot of very welcome shade on hot days as you ascend the many switchbacks. Occasional breaks in the trees allow for great views of the surrounding peaks. Near the ridgeline, there were more views, and a few campsites along the trail.

The trail gets a little bit technical in a couple spots, but nothing serious. If you?re able to make the climb up the trail, the rocky areas shouldn?t be an issue. I thought I might have to carry Newton up a small rocky scramble area, but he hopped up just fine on his own.

The trail flattens out just before the 3 mile mark. There was still snow when I visited in May, but the summer bring wildflower fields, and a much easier-to-follow trail. There were foot trails through the snow, but it wasn?t immediately clear which

direction the trail followed, I started to go the wrong way at one point before finding the correct path. A map can be helpful here, but if you?re vigilant about following the most heavily-used path you shouldn?t have a problem.

The trail then drops a little to Virgin lake, which is fed entirely by snowmelt and rainwater. Blanca Lake isn?t too far past this, though the descent is a steep one. In 0.6 miles, you lose 600 feet of elevation on a very rocky and root-covered trail. The trail flattens out once again, and very soon you break out into an incredible view of Blanca Lake. The water is a remarkable blue color (thanks to the glacial till from the Columbia Glacier above), with a backdrop of Monte Cristo, Keys, and Columbia peaks. The sight is truly unbelievable. I still look at pictures from that day and can?t quite believe the spot really exists. There?s just something about the setting and the perfect framing that make the site seem unreal.

Newton and I hung out?here for lunch and took in the views, then headed back down. I haven?t been to Blanca Lake for more than a day hike, but I know others who have spent the night at the top. Some hike around the footpaths skirting the lake, and one friend told me she and a group of her friends carried rafts up the trail and paddled across the lake to camp in an area unreachable by foot. I have no doubt that waking up next to Blanca Lake would make for an unbeatable backpacking experience.

The trip down was much faster, but required some care so as to avoid too much knee pounding. I passed three or four groups who were just heading up. Unsurprising for a sunny weekday hike. Clouds started rolling in when I was about halfway down, and I felt some sprinkles not long after. By the time I got back to the parking lot, it was pouring down rain, with seemingly constant lightning and thunder. I was definitely happy to be heading out rather than at the top of the trail. The storm was a good reminder to me to be aware of the speed with which storms can roll in, and to keep in mind the weather differences in the mountains compared to the lowlands. I had checked the forecast before leaving the city and expected sun for the entire day. However, the mountain weather was a bit different. Something I need to remember to check and to prepare for.

Unsurprisingly, I would absolutely recommend hiking up to Blanca Lake. It is a challenging climb, but in no way impossible. I am in relatively good shape and didn?t struggle with the elevation gain. If you aren?t regularly active, I wouldn?t discount the hike entirely. I would just suggest budgeting a bit more time and bringing plenty of water and snacks and allowing plenty of time for breaks along the trail. There were a couple streams on the way up, but plan to bring enough water for yourself (and any dog companions), in addition to a water filter if you have one. And finally, go on a weekday if you can. The trail is very popular on weekends, and I find the whole hiking experience to be much more enjoyable when I don?t have to battle for parking spots or wade through crowds.

The trail to Blanca Lake ?starts on FR 63. Take Highway 2 east toward Skykomish. Just past Skykomish, FR 65/Beckler River Road is on the left. Turn here and drive 12.5 miles. The road turns to gravel just after passing Beckler River Campground, at which point you will likely encounter a fair number of potholes. These, combined with the winding road and occasional steep dropoffs, can make for a lengthy drive, so make sure to budget some extra time into your trip. At 12.5 miles, you will reach a 5-way junction. Take the second left and drive another 2.3 miles, and take a right on FR 63. Another two miles, and the trail is on a small road to the left, at the top of a small hill. When I visited on a Thursday, there were only 5 other cars in the small parking lot, but spaces may be sparse on weekends and holidays.

These are some of my favorite gear items for day hiking:

In addition to being important for nourishment, tasty hiking snacks are so rewarding at the end of a tough hike. For summits, I prefer treats that include chocolate – these are some of my favorites: 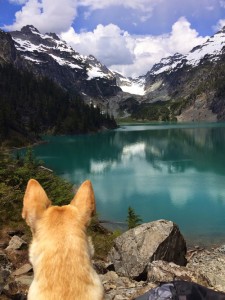